MERRY CHRISTMAS TO FRIENDS AND ACQUANTANCE

Posted by BUTIZA'ON at 4:43 PM No comments:
Labels: Merry Christmas

It was reported that the use of ‘bazaar language’ or ‘rojak’ should be reported to the Malaysian Communications and Multimedia Commission (MCMC), Dewan Negara was told. The radio station had been warned but no stern action had been taken yet. They are monitoring the situation to ensure that the national language is not marginalized in the dissemination of information to the listeners.

There are a few radio stations that use bazaar language but the most glaring and daring dj must be KK Suria FM. Only early this morning he spoke in English, Chinese, Kadazan, Dusun and bahasa Melayu Sabah.

In my personal opinion as there are many radio station in the country that uses proper Bahasa Malaysia, it is alright to have one or two stations that uses bazaar language in their medium of communication. When listening to this station, some of the callers spoke to the DJ with their everyday language with their local slang of which was sometimes hilarious. When you speak freely with the DJ (minus the bad word of course), the listener is entertained of what there are talking about.

I had the opportunity of talking to a government radio station ‘dj’ reminding him of the competition from private radio station which posed a great treat to their based radio fan. They are aware of it and do not deny about it but they could not do anything to counter their onslaught as they are bug by regulation, guidelines and concept of the radio station. They have tried to change their style of presentation without altering anything but sometimes they were warned by the officer in charge to stick to the style which was used since the 60’s.

Hopefully the popular radio station will not be warned and action taken against it as has a lot of following and popular with the listeners.
Posted by BUTIZA'ON at 4:56 PM No comments:
Labels: Language

I was really lazy to post anything this few days/week as when I started to write something, I deleted it again. I'd like to borrow a phrase from someone powerful and influencial when he answered some question and answered 'no inspiration yet'. I think most probably this laziness is due to Christmas mood and looking foward to my long leave.
I like to share with you this picture which bring out some message. Happy holiday to all who's on holiday. 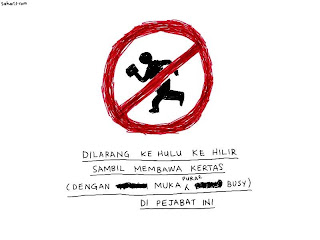