Gangnam Style is a 2012 K-pop single by the South Korean rapper Psy. It has led to various user generated parodies and reaction videos from all over the world. Gangnam Style is spreading like wildfire and millions around the globe have become obsessed.

Gangnam Style is widely praised for its humor, catchy rhythm as well as Psy’s unusual dance moves that have introduced many people to K-pop. First released on July 15, 2012, it entered the Gaon Chart singles chart at number one upon release.

I have read about the phenomena of the Oppa Gangnam style Parody but just brush it out as another music style of the music industry especially the younger generation style of music. It was once again triggering my curiosity of the music when I read in the facebook that the Gangnam style parody has reached the shore of Sabah.

The song titled ORANG SABAH STYLE (Oppa Gangnam Style Parody). The song is in Hakka (Chinese) but there is English translation at the bottom of the video unless you are blind as opposed to some comments about the video.

The song is about humor as well as a way to introduce Sabah as a tourism destination where the songs mentioned about the places to visit, the good food and of course the beautiful ladies of Sabah. I think it is much better to hear the song yourself although it is a Chinese song but song that was done Sabah Style gangnam version.

Some of the lyrics of the Orang Sabah style I managed to understand are as follows;

Come to Sabah, wanna try the seafood. Go to Island and mount kinabalu as well.
Not only beautiful girls but we also have Urang utan
And also gua ..shemale and many beautiful girls.

Orang Sabah Style wish all Malaysian fellows
Happy National day, regardless of west or East Malaysia
We are one family
Happy national day.

When I watched the video yesterday it had only 28,000 hits but this morning it has already hits 274,000 and counting. As a Sabahan style of Gangnam and was just publish in Youtube since 27 August 2012 I do not see why it cannot reached 300,000 by tomorrow morning.

Way to go Orang Sabah style we support you.

HIT FROM BEHIND BECAUSE OF BUKO SALAD

After eating Filipino Buko (Buco) salad, I remembered that I did make it last time after using the recipe I read few years back. I handwritten copied the simple menu and went to buy the necessary ingredient for making it.

I had already bought the tinned fruit salad, daily milk and few other things except for the young coconut. I went to Bukit Padang to buy the young coconut as the stall that I usually bought my young coconut before was out of stock due to the Hariraya holidays.

Me   :   Do you have thick young coconut but not hard coconut flesh?

Stall owner   : I think I have 3 coconuts left like what you wanted. 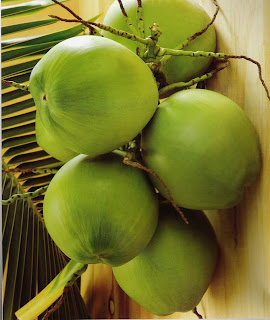 I paid my coconuts and drive out of the parking bay towards the roundabout and bump I felt as I was hitting something. I looked at my rear mirror and saw the car behind me too close to my bumper and realized that I was hit from behind. I get out of my car and a young guy who was driving the car behind me came out of his car also. Before I could see the damage, the guy was clasping his hand, making a Japanese bow and asking for forgiveness. 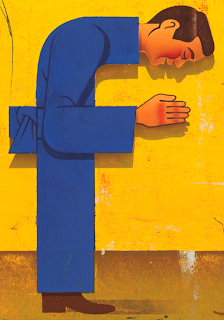 I checked my car and nothing was broken and smile to the guy as a sign of forgiving him. I was also relieved that I didn’t drive my other car. I was also happy that nothing happened as it would have been troublesome to deal with accident especially to a very arrogant person as I experience before. The young guy did have a huge smile and relieved. 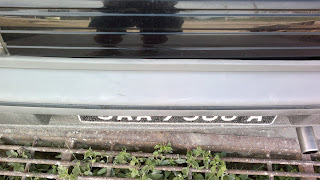 In spite of the small matter, I made my Buko or Buco salad before I went for the wedding reception dinner but nearly drench myself because of the heavy rain.

I did not follow exactly the amount of the ingredient and it was perfect and I was tempted to increase the amount of daily milk cream/whipping cream or condense milk as it was also nice with less milk. It is really up to the individuals of how sweet you want their Buko salad tastes. 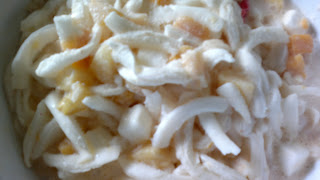 After putting it in the freezer overnight, it was really delicious when eaten on a hot day. 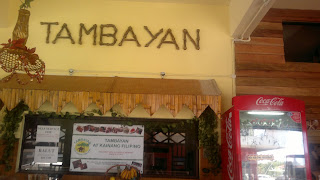 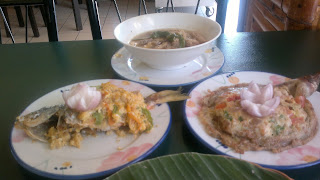 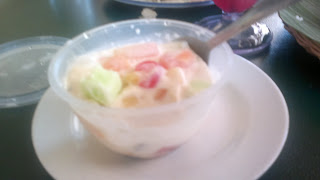 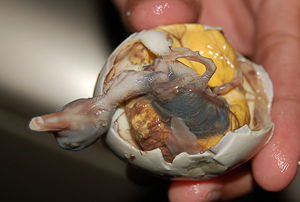 It is not the last of my visit to Filipino cuisines as I want to try the crispy pig knuckles on my next visit to a Filipino restaurant. Any one likes to recommend a good Filipino dish?
Posted by BUTIZA'ON at 2:20 PM 5 comments:

A beautiful lady was standing in a bus with a sleeveless skin-tight dress and there was a tattooed rose flower on her arm. A man by the name of Aboi was standing beside her and talks to her.

Aboi   :  Your flower is very beautiful; can I kiss your tattooed rose flower?

The lady did not responded to Aboi but she relented after being asked again and again.

Lady   : Before you can kiss my rose, you should kiss the roots first.

After she told Aboi she rose up her arm and shows him her hairy armpit. 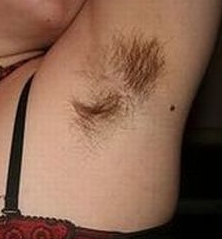 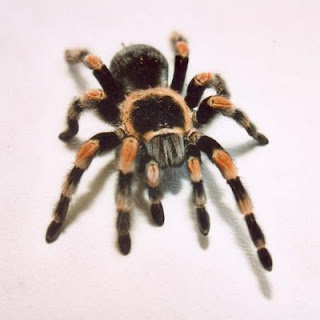 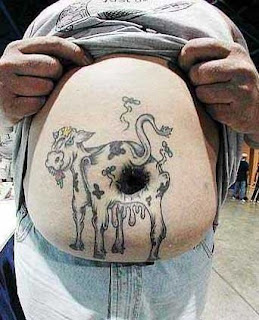 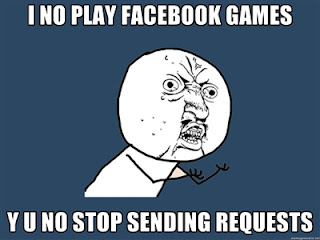 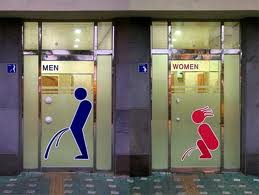 Do you know that the minimum fee to go to the toilet in Kota Kinabalu is 0.30 sen and if you need toilet paper that would be .050 sen? I was at the Suria shopping Mall when I need to use the toilet urgently after having heavy breakfast. I saw the the sign to pay 0.30 sen and grab myself the toilet paper not for wiping away my dump but just to dry my bottom with the toilet paper after spraying myself. I found out that using spray is the most cleanness to use as it will wipe away all residue that is present.

Dv   :  I thought it include the toilet paper. Why so expensive to dump here?

Toilet Lady   : All other shopping complex charging the same lah.

Do you know that when you missed your morning breakfast you eat anything when you get hungry? I rarely missed my morning breakfast but yesterday after attending my therapy, I went to the drive-in payment for my electricity bill. I went to Suria shopping mall for another bill to pay and to sort my mobile roaming service. My roaming service was not available when I went for my tour to Taiwan recently and depended on my facebook to get in touch with family members. 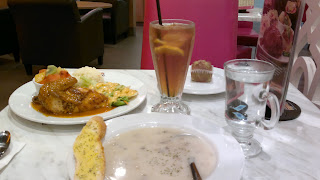 I was really hungry and went to the nearest fast food outlet and landed myself to Kenny Rogers Roasters and ordered whatever nice to look at on the menu lists. It was the Kenny's quarter meal which consists of quarter chicken, salad, rice, mix fruits and pandan muffin. The side dish was mushroom creamy soup and my favorite drink was cold tea lemon. It wasn't the type of food that I like but once you are hungry anything can do. 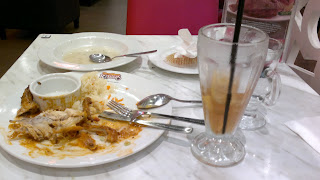 Do you know that Celcom customer service centre is called BLUECUBE now? I was looking for the Celcom Logo at Suria shopping complex but missed it. After giving up I look for the location notice board at the entrance of the shopping mall but there was none. I saw the security guard and approached them.

Dv   :   Where is the Celcom customer service?

I went to the lower level but still couldn't find it. Desperately I asked the Metro jaya sales assistant and told me to look for the bluecube. 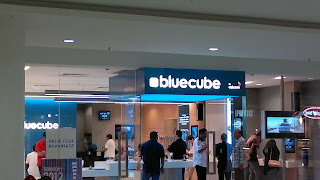 Do you know that the customer services of Bluecube will approached you first hand asking what type of services you needed. It was a good service but the time taken to process your dealings need to be shorten.