I was just sitting down for my breakfast early Saturday morning when I open my folded newspaper and saw the headline of nine years old boy braved a fire to save his brother. I was appalled by the news as I thought that I had a dream about that incident. Then I remembered that I was reading the Reader Digest’s December 2007 edition last Friday’s night. It was on page 25 of the magazine. It was also a nine years old boy who saved his disorientated and confused younger brother crying in the corner of a room. He was scared of the fire but when he heard his brother crying, he rushed in and brought him out of the house. The story about the fire was from the city in the Philippines. 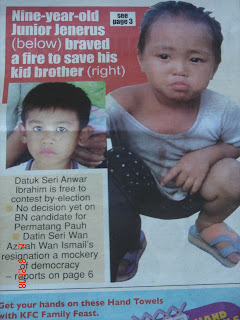 In the Saturday report it was reported that a nine years old from Keningau braved flames to save his two years old brother. He woke up his sleeping little brother and brought him out through the window of the burning house. Though the house was on fire, the only thing he thought then was to save his brother. It was heartening to know that children as young as nine years old was calm under pressure and acted quickly. 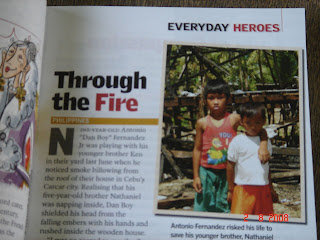