COMPUTER PROBLEM – TIP OF THE DAY 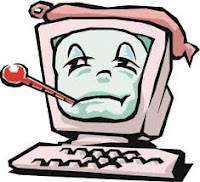 Yesterday my office computer suddenly blackout and I was furious as my monthly report was all ready to be send as it was already late. I called the unit concern to fix my computer and at the same time brief them the symptom of the problem. They suspected a hardware problem and they will forward my complaint to our computer vendor for their further action.

Our company vendor from Kuala Lumpur called me and briefs her about the problems and symptoms. As I was driving home the company representative from Singapore called me about the same thing and I told him to call me tomorrow as I was not in the office.

It was before 9.00 am that he called me and once again asked about the symptoms of which there was a red alarm and a five beeping sound followed by a short interval and start again. He told me to open up the PC and remove and re-insert back the RAM card and power up the computer. After power up the computer it booted perfectly and running again. The representative advice me to reboot the computer again before going back to confirm it is working without problem.

If it was a personal computer and you are someone that only knows how to use the computer just like me, you would find your way to the computer service shop for assistance and would be paying quite a sum for their services.

Next time you find your computer having the same symptoms, just remove the RAM card and re-insert and hopefully it will boot-up again.
Posted by BUTIZA'ON at 3:55 PM
Labels: GENERAL

Yeah. The RAM can sometimes go out its sanity that it can drive one crazy. Well, anyway thanks for sharing out a tip on this particular computer problem