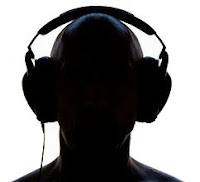 It was when a pastor shared his experienced with a jogger who was using a headphone when he was jogging. The pastor was curious of what music the jogger was hearing as he was so relax while jogging. So when the jogger completes his rounds, he approached him and asked about the music he was listening.
Pastor : What music are you listening?

Jogger : I am listening ‘Sound of Silence’.

Jogger : Would you like to listen to the music?