After emerging out from the Tan Son Nhat Airport in Vietnam, we were greeted by our tour guide with a big signage in hand with the name of the tour Agency that arranged for our trip. We were ushered to our designated bus at the entrance of the airport.

Tour Guide   :   Good Afternoon Ladies and Gentlemen, Welcome to Vietnam. My name is Miss Ha. Before  our bus ride to the town of Vung Tau, which is a 3 hours drive from here, I will bring you for your lunch. You will experience you first meal here with Vietnamese Pho or Noodle Soup.

Leader   :  Miss Ha, some of us does not take beef and hopefully we have a choice of chicken noodle soup.

Miss Ha   :   We do have Chicken noodle soup. How many of you want Beef noodle soup?

Only 3 of our friends asked for the beef noodle soup and the tour guide called the restaurant for the selection of noodle soup. 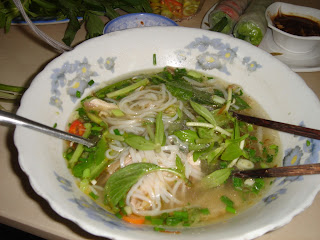 I do not like Chicken noodle soup but for health reason didn't asked for beef noodle soup instead opted for the chicken noodle. The taste of the noodle in Vietnam is similar to the Vietnamese style noodle soup which could be found in Gaya street and Karamunsing capital called Paper Mint Vietnamese restaurant. 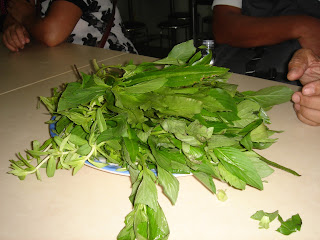 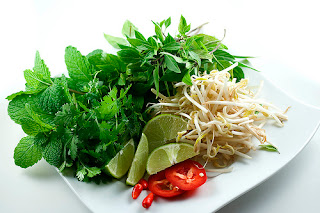 The only different is the Pho vegetables and herbs which is so much and with strong aroma. I pitied with my nephew who was sitting at the other table who do not like herbal vegetables even with shallots or onions.

Me   :   Miss Ha, could you ask for a noodle soup without the vegetables and herbs for my Nephew? 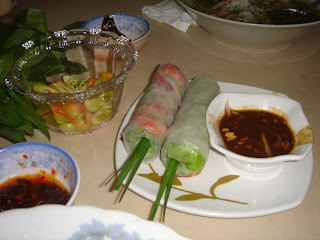 The vegetable roll in the picture above was too herbal for me as I didn't finished eating it due to the foreign aroma but the dipping sauce was very good with a hint of satay sauce. Don't ever pick the slice chili and wallop it in your mouth as it is very very hot as our friend experienced.

Overall the food in Vietnam was very delicious and maybe will share with you the food selected by the King of Vietnam which was called Food of the King.
Posted by BUTIZA'ON at 1:31 PM No comments: 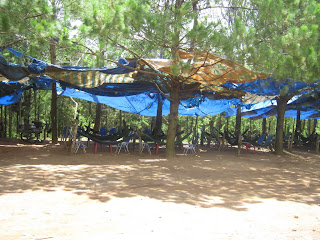 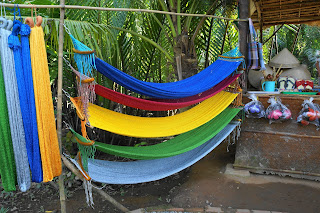 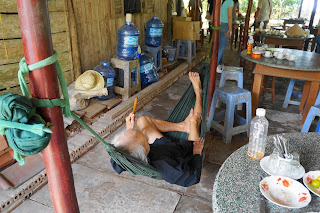 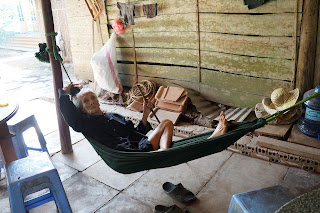 Hello guys. Happy new year to all readers of this simple blog. So this is my 1st posting for this year and hopefully my ideas will not fail me to write more but assure you that I have a lot of materials to write especially regarding my trip overseas but we will see how it goes yeah but no promise that I can do it. Anyway let's move on to my posting today and maybe you all had encountered the same as I did this morning.

I am a 'Preferred card' owner of a bank but just used it once. This morning I went to the bank to update my bank account or updating my shares interest. I went to the customer service counter to take my number.

Me   :   I want to update my ASB account. I am a 'Preferred card' holder and can I have the number?

Staff   :  Sorry sir, only when you are dealing with the account of our bank that you has the privilege.

I was a bit disappointed that I was not given the privilege number as I thought that I can also take the opportunity to update my account with the bank also. Actually the bank was only the agent for the ASB shares.

Staff   :   Sorry sir but I haven't called you number yet.

When I looked up for the number on the counter, it was 1029 instead of my number 2029. I apologies to the teller and quietly back off feeling embarrassed as there were a lot of people in the bank.

After dealing with the bank, I went to deal with my lucky number and hopefully it will give me luck.