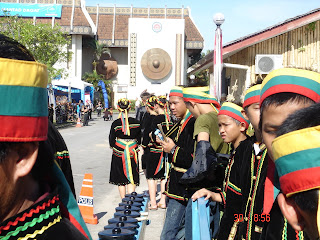 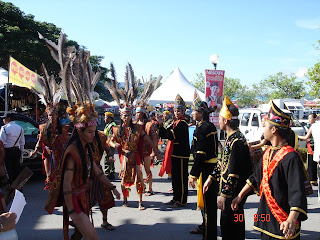 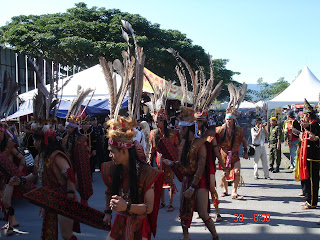 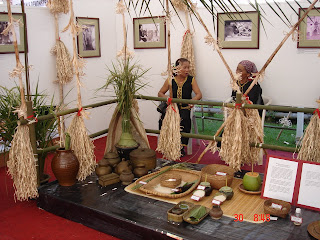 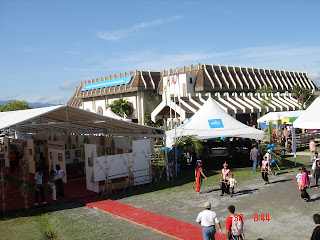 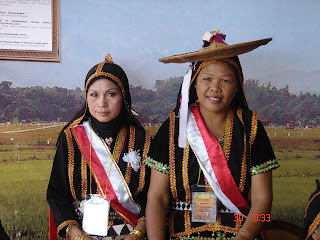 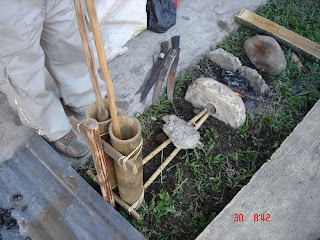 Traditional way of heating a iron bar for making knife. The big bamboo was used to pump air through the small bamboo. The pump was made from chicken feather which is attached to wooden stick.
Notice the hat worn by the lady ... wonder what costume they were wearing. I was busy taking the pix and unable to ask them about their traditional dress. 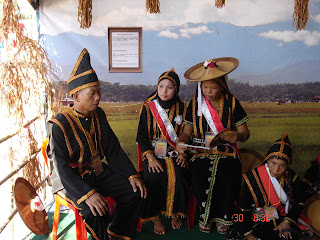 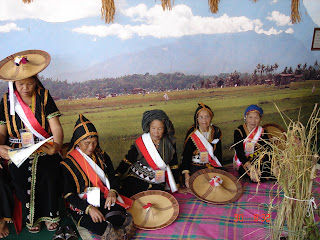 Photogenic Mama - I was looking at one of the traditional houses when i noticed this understanding 'Mama'. When i took the shot without permission, she was ready to pose like a
professional. She was attired beautifully with cheeky smile.
Thanks Mama. 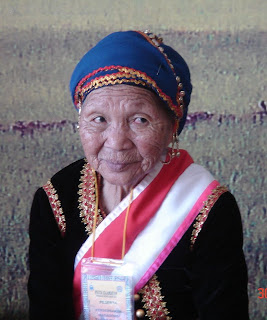 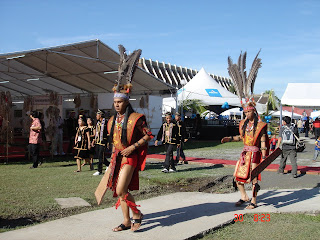 Murut warriors - getting ready for war! 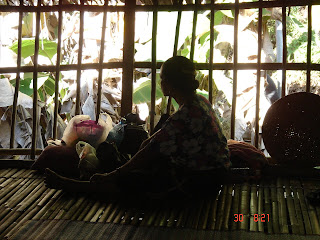 Inside Rungus longhouse - 'Inai' thinking about the future. Will our cultures continue when the elders fades into the hallmarks of time. The task will be shouldered by the younger set of dedicated and cultural knowledgeable KadazanDusun. Time will tell ..... 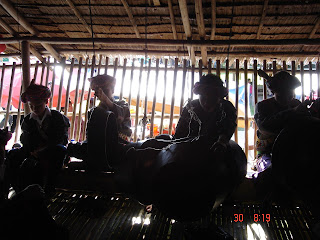 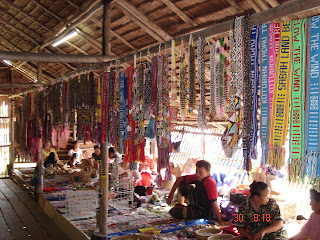 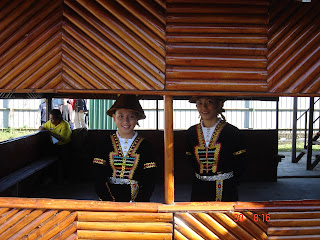 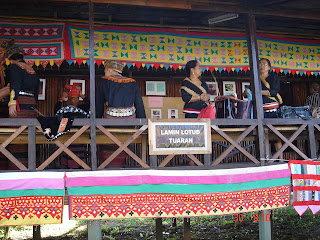 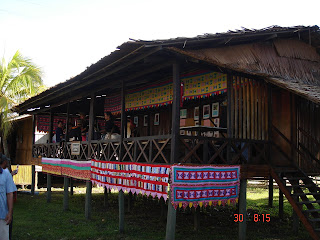 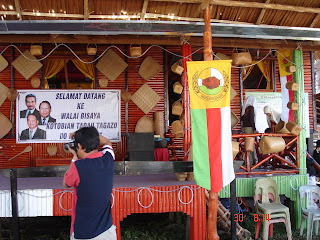 To start with my post after a long leave from blogging i will post pictures of the first day of festival celebrated at the Hongkod Koisaan (30th May 2008) which i took early in the morning just to beat the hoards of people which will come later in the day. I will try to capture more pictures on 31st May 2008 and who knows i may get some of the Unduk ngadaus pictures. Anyway, a more eloborate website can be visited at http://www.undukngadau.com/. to look at the list of Unduk Ngadau representing their District.

The Significance of the Kaamatan Festival
Tadau Kaamatan has become a yearly expectation and epitome of all local cultural communities celebrations and heritage expressions through songs, dances, music, traditional attires, traditional sports, cultural shows, arts and crafts sales and traditional houses. People of all races and tourist join in to participate and add to the variety, colour and gaiety of the celebration. Indeed the Tadau Kaamatan has become a vital platform and venue for forstering, preserving and propagating harmony and unity in diversity for the multi-ethni kaamatan festival.c, multi-racial population of Sabah.

The Essence of Tadau Kaamatan
Kaamatan festival is a dedication to pay homage and honour to "Bambazon" (rice spirit) and to thank "Kinoingan" almighty God for their bountiful harvest and for his genorousity in prolonging life on earth. It is also an occasion where the promise of friendship and brotherhood is renewed through mutual forgiveness as manifested in the open to all share caring.
KOTOBIAN TADAU KAAMATAN 2008 TO ALL.

I spent most of my time in front of a computer not because of addicted to it but my job requires me to do most of my work facing the computer screen. When at home i do the same thing but mostly not related to work but browsing through the internet looking for articles, blogs etc. Since the month of May is the Kaamatan festival i search for Unduk Ngadau and landed to one interesting web regarding mostly of the showcase of Unduk Ngadau representing their district to the state level beauty contest. What caught my attention was the forum section where discussion about the failure of the younger generation to speak their mother tongue. A quite number of them blame the surrounding where they live, like living in the urban areas and living abroad when they were still small. Surprisingly, they never blame their parent totally about their inability to speak the language but the environment where they were raised from toddler until their teenage years. If they defended their parents failure to teach them the language and blame it on the surrounding i think that would be debatable.

Parents should speak to their children in their spoken language ie KadazanDusun regardless of where they're staying, urban or rural environment. Does that mean to say that if we want our children to speak the language then we have to send them back to the kampung to learn the language.
Posted by BUTIZA'ON at 4:06 PM No comments:
Labels: Unduk Ngadau vs Mother Tongue

Well … well … first of all thanks to a friend who reminded me of this blog which I started in 2006 but inactive for sometimes hehehe . Earlier on during my introduction of this blog I had stated about how bad my writing but who cares as long as the message can be understood ..... right?

Before posting anything I did change my blog template, nothing wrong with the old template but just try to change the image which i feel need some refreshing and maybe allows me to think of something interesting to write and post here. I will also update my profile and maybe post my pix but that have to wait.