Last Sunday I went to the Bazaar market at Donggongon town and I tell you how lucky we are living in this part of the world where fruit season is a yearly affair. There were a lot of seasonal fruit on sale. As I was mingling with the crowd, I saw a friend eating wild durian so early in the morning and I stopped to ask about the price and since I’ve not eaten the fruit for a long time and bought five small durian for RM18. 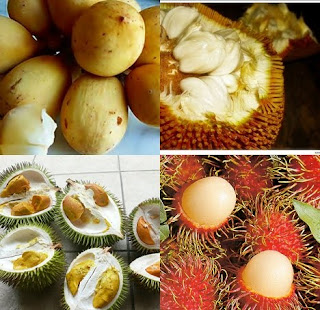 There were a lot of selection to choose from whether Langsat, durian, Bambangan, tarap and many other tropical fruits. I bought one tarap fruit for RM3.00 each as I haven’t eaten it for a long time. When I was a kid I used to like this fruit but lately I dislike it because of its strong aroma. I remembered during the time when there were so many fruit trees at my parent orchard and after collecting unripe matured fruits, my grandmother would put it inside a big box made from copper. It was so heavy for us children to lift the lid at that time and sometimes it would need at least few children to lift it up. There was a time when we lifted down the lid when one of my cousins was inside the box and trapped him inside. He would scream out to be released and when our grandmother heard about what we had done, she would hit us with a rattan stick for our punishment. The fruit ripen faster when put inside the box and the smell that escapes from the box was so aromatic with different kind of tropical fruit inside the box.

Do you know that most part of Sarawak and entirely the whole of West Malaysian do not know about the Tarap fruit or scientifically called Artocarpus Odoratissimus? I was driving with three West Malaysian to Keningau last time when they saw the fruits hanging at a stall along the highway to Keningau and asked what fruit was it. I stopped at the next stall and had them tasted it and they like it very much. The best way to eat tarap fruit is by using your hand and it would be advisable you keep a bottle of water in the vehicle to wash your hand later. A popular TV program presenter amused me when he cut a durian with a knife and using fork to eat the fruit as the best and way is by using bare fingers.

Posted by BUTIZA'ON at 10:36 AM
Labels: TROPICAL FRUIT