It was my dream to visit the Sabah railway station in Tg. Aru to inquire about the travel schedule to all it's destination but instead asked my nephew who is also interested for the travel trip on the train. A friend was promising me for the trip for awhile but there was no indication of him going for the trip so I decided to suggest it to my family members and they were indeed very eager especially the young ones.

It was therefore suggested that the coming Saturday was chosen as it was also the last of the school holiday. We chose for the earliest trip that was at 7.40 am and  make sure that all of us must be at the station at 7.00 am. As we were looking forward to the trip, there was no problem of waking up early. I was once again a young kid telling all the first timer of the thrill travelling on a train. There was no problem parking your vehicles there as there were ample parking lots as you are taking the return trip in the afternoon.

When we reached Tg Aru Railway station, there were a lot of people mostly seated with their travelling bag and  maybe cookies or Raya delicacies inside the bag and boxes. As a first timer to the station I went directly to the counter but nobody was manning the counter. I was surprised as the travelers stood up behind me to make a queue. (Ikut Barisan bogia lol ...) They thought that I was there for the queue and since they stood behind me why not stay put instead of going at the back of the queue. While waiting for the counter staff to open I spoke to a lady about the train and the railway route. 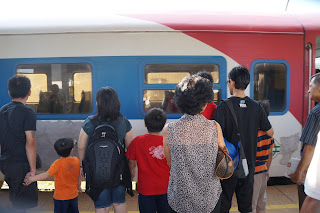 
Butizaon  :  Are you are a frequent traveler of this mode of transportation?

Woman   :  This is my mode of transport now and it is also cheap and safe. I am from Membakut.

Butizaon  :   How much is the fare from Tg. Aru to Beaufort and the time it depart from Beaufort station?

Butizaon  :   That is perfect as we will reached Beaufort at 10.00 am and have our early lunch or late breakfast before departing Beaufort station.

Woman   :   Do you know about a train mainly for tourist which operates from Tg. Aru to Kawang town only?

Butizaon   :   Yeah, I made inquiry about it but it is under Sutera Harbour management and it is really very expensive. They costs almost RM300.00 per person (adult). I think it cater for foreign tourist or rich local people who like to taste the train trip to the rural areas.

Woman   :  It is inclusive of breakfast and lunch but to us locals it is still too expensive.

About 5 minutes later the counter open and I was 2nd in line to purchase our tickets. Some of us went for a light breakfast as we had time to spare. When we return after a short breakfast for the children there were still many queuing to purchase their tickets. We should be also in the queue if I hadn't looked for the counter staff.

The train to Beaufort departed at almost 8.00 am and it surprise me that the train was new and comfortable with air-condition minus announcement informing passengers of all the stations. The number of passengers were so many that some of them standing and it forced us to share the seats among the families as some of the passengers were with infants. I almost cramp my leg as I let my nephew sat on my thigh although I let him stood up once in a while.

We reached Beaufort at 10.00 am and we disembarked and looked for the ticket counter but it was not open yet so we went for our late breakfast about a stone throw from the railway station.

When my Hokkien mee arrived I thought that it was someone else cos the Hokkien I was used to was big dark noodles with lots of dark soy sauce and crunchy pork skin julienne to small pieces and added to the dish. 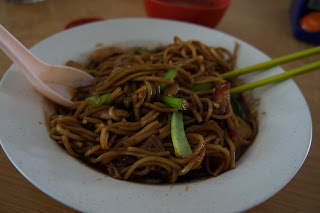 When you travel in groups make sure you are in the train before someone else so that your groups will be together instead of separate seats.

It was a very enjoyable trip to Beaufort especially the children and managed to go through the short tunnel again. I recommend this trip to everybody reading this post as to appreciate our local railway track especially children as it is safe, cheap and comfortable.