Do you know Milkfish or Ikan Terubuk?

Milkfish, scientificially known as Chanos Chanos, Bangus in the Phillipines while in Indonesia it's ikan Baulu. This fish is important in India, Southeast Asia and the Pacific, particularly the Phillipines.
It is delicious fish but with one problem- it has a million bones as it has about 180 inter-muscular spines.
However, it is fortunate that the bones are in bundles, so one does not have to deal with them individually. Farms in the Phillipines and Indonesia are among the countries producing thousand metric tonnes of Milkfish. Milkfish can be eaten in many ways, like smoked boneless Bangus and dry salted boneless Bangus.
Ikan Terubuk Masin - Sarawak 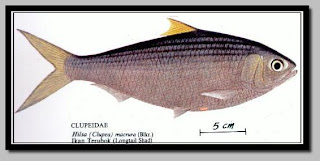 I don't know whether Milkfish and ikan Terubuk are the same but what i know both have a million bones and processed and eaten in the same manner i.e smoked and grilled or fried.
I was introduced to this ikan masin Terubuk by a friend from Sarawak last year. We had a course in KL, when this friend called me whether i want ikan masin Terubuk. As i never tried it before, i agreed. Imagine the trouble my friend in wrapping the fish and bringing to KL before i could bring it to Sabah.
It’s a kind of salted fish but they are not dried as our usual salted fish but fresh looking fish (wet). I don’t know if they have any special ingredient, but from the look of it, the way they process the fish is quite simple. The ‘interior’ of the fish is cleaned, then they just put loads of salt on the inside and outside of the fish. 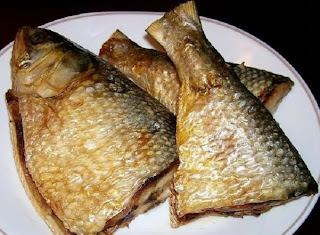 The taste of the fish is actually quite nice, not as salty as normal salted fish, and it still preserve the texture of a normal fish. I was informed by my friend not to remove the scales but to fry it until crispy, true to his word, the scales was crispy. So next time all crackpot friends visit Kuching, try eating ikan Terubuk.
Posted by BUTIZA'ON at 12:47 PM
Labels: Do you know Milkfish or Ikan Terubuk

Terbok is large family. There is also Tamban Terbok. The milk fish is entirely different fish. The milk fish is good fighter when caught on a fishing rod. the bait for milk fish are bread. The tamban terbok which about 7 inches long is caught on fly. Is popular here they tie 7 fly on a rig and jig. The fly with only chartuse color fabric is tie to it. The hook is very small size 16.