My Birthday fall on 19th July but only once celebrated it with a round table dinner in a restaurant with family members. I was planning to celebrate it again today but unfortunately we went to Kuala Penyu for the wedding celebration on the bridegroom’s side. So the dinner will be tomorrow (Sunday) with twenty diners. I hope to post some pictures then. 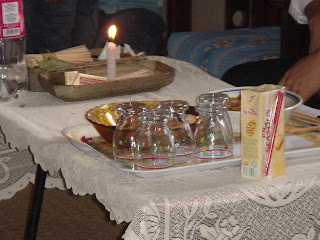 It was my first experience to witness marriage ritual of the Kadazan (Tatana) since my niece is the first to get married to a Tatana guy. There was a marriage ritual performed and I participated in it. The ritual or tradition was about the process where family members from the groom and bride offered each other with drinks (alcoholic). The ritual started with the offering of drinks from the bride/Groom to their parents and vice-versa. The offering continues until the last of the groom/bride uncles/aunties and their siblings.

I observed it was a dare drinking in a good way. When offered with the drink and you decided to bottom up your drink, the other fellow should bottom up his drink also. How interesting to those who can take up the challenge.

The ritual ended with the sipping of a cup of tea and smoking of cigarette. By then the bond of relationship between the families have been established.

*Pic 2 - Offering of drinks from father in-law to Groom. 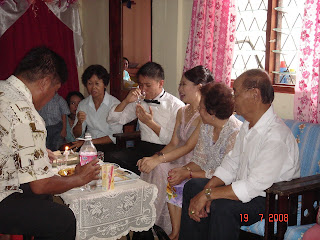 The only drawback I found about the rituals was the offering of the drinks to the groom and bride. Imagine if both family having large family members. It would be too much for the bride and groom to drink it all. Not to worry though cos it is not mandatory to finish it all, sipping a bit is good enough in this modern time. I think it was mandatory during olden days as this ritual was a taboo then if not followed.

Pic 3 - Drinking of the offering from the Groom. 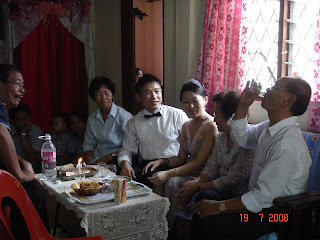 I was also wondering why there was food on the table during the ritual but it was not eaten. Was it supposed to be taken after drinking the alcoholic drink? Can anyone from the crackpot friends who can enlighten me about it and give comments. It was really an experienced to witness such ritual and hopefully they (Tatana) will preserve the tradition for our future generation. 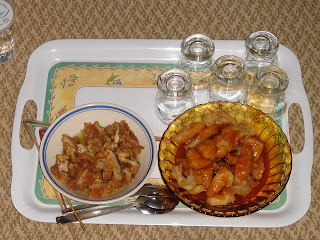 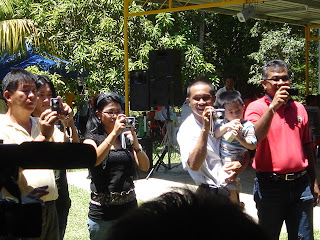 Posted by BUTIZA'ON at 9:18 PM
Labels: Tatana Kuala Penyu Marriage on my Birthday