The good thing about meeting old friends in any occasion be it during wedding parties or birthday parties is that old stories would resurface again and sometimes embarrassing but in a good way which makes a good laugh amongst friends.

One friend shared about his late mother vegetable dish which he misses very much and when he saw the vegetable sold at the Tamu (Market) he bought the vegetables to be cooked. Many of us have tried this type of vegetable, which can be found in the paddy field after the planting of the paddy. It is called ‘Kaakatung’ or some people called it ‘Katung- katung’ depending on which district you come from. I was discussing it with some friends about this vegetable but couldn’t exactly find it in the Internet to let them know about this vegetable. The dish cook with this vegetable is really very simple as a couple of dried shrimps or anchovies is enough, make sure that you choose young ‘Kaakatung’ as it is much better and really soft when cooked. 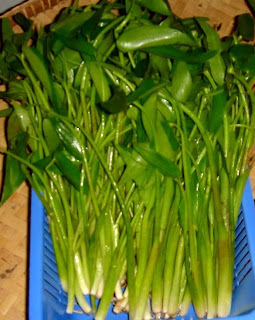 So this friend shared about a dish his late mother usually cook which he missed very much and ask his friend to cook with a can of King Cup Sardine. I never tried cooking with King Cup Sardine and according to them it is much better than shrimp or anchovies. King Cup sardine can be cooked with many types of vegetables and this type of dish can only be found in villages but now it can be found at a ready cooked dish at some restaurant in town. Last Sunday it happen that there was this ‘Kaakatung’ sold but not as young as I preferred and I bought a can of King Cup Sardine. I cooked it in the evening and it tasted okay but rather the ‘Kaakatung’ vegetable was a bit tough as it was not young. I preferred a simple ‘Kaakatung’ dish with dried shrimps fried with some powdered anchovies. 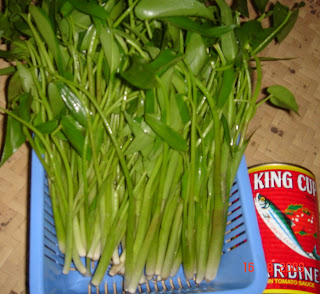 We were in stitches laughing when one of the friends shared his story of how after eating a lot of ‘Kaakatung’ the night before, a cleaner of his office toilet complaining about staffs throwing vegetables inside the toilet bowl. What she doesn’t know was our friend did his thing much earlier and was trying to get rid of the ‘Kaakatong’, which was floating in the toilet bowl but failed to flush it all. The disadvantages of eating too much ‘Kaakatung’ was that our stomach would not be able to process it effectively as we tend to swallow the whole vegetable. Due to the softness of the Kaakatung, we tend not to cut it but in my case I tried to cut it in half and so far no floating of ‘Kaakatung’ the next morning. Eat it in moderation so it won’t float in your toilet bowls next time you dump it. 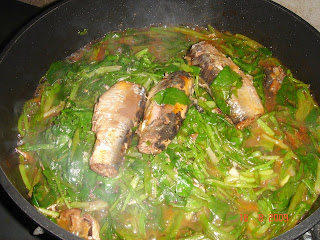 ‘Kakaatong’ can be prepare as a salad too or Hinava. Squeeze few lime, salt to taste, shrimp paste and chili and add it to the vegetable by squeezing the ‘Kaakatong’ until it mixed well. Eat it immediately or chill it in a refrigerator before eating. Eaten as an appetizer.

Posted by BUTIZA'ON at 11:31 AM
Labels: TRADITIONAL FOOD

OMG! This is my food. I so miss it. We used to have paddy field and had kaakatung as the vege during our meals. So, delicious. Dad made it as hinava do kaakatung as well.

Thanks for dropping by at my blog and for sharing all these lovely food. Hope to keep in touch.

Thanks for visiting and commenting. Thought this vege is foreign to you. I'll be visiting your web for sure.