This will be my last posting before I go for another vacation next week and I will try to share with you my vacation after I failed to update my previous vacation after the Vietnam trip.

My last posting was about my lunch appointment with my friends and at that posting I did mentioned 3 stories at once. I wrote about my meeting with different friends at the same time as not to bored my readers of the posting although mostly I wrote in dialogues as to make it more interesting and I did also change the real names of my friends and hopefully they are aware that I was writing about them.

This posting was written after I saw a picture posted on facebook and it reminds me of it when I was growing up in a paddy farming family.

When I was growing up as to all the village children, we were required to help our parents to all the chores as we don't help our parents there would be no food on the table. It was all hard work but it help us to nurtured and prepared us for our future. It was not a bed of roses as we progressed in life but we managed and not to starve. It was very fortunate for us to experienced those hard life which made me a  better person. I would always tell my friends that I am both analog and digital person as I've experienced both era. 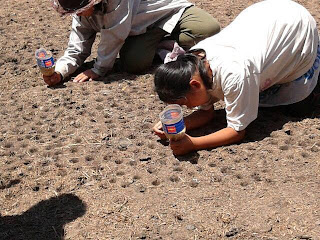 In the picture was an upgraded step to filled up the hole with paddy grains with a half cut plastic bottle.

Before paddy is planted on the rice field a nursery is prepared to plant the seed and there we were helping the elders to clean the selected nursery by removing the grass and later prepare for planting the seeds. The elders were tasked to make the holes with a sharpen round pole. The children as we were at the time were tasked to fill up the hole with the paddy grain until all the holes were filled up. Imagine doing it the whole day with the hot sun on your head.

We were given any types of container to put in the paddy grain and the unfilled holes must not be stepped on until it were filled up with the grains. We would be shouted if we wandered on the unfilled holes by the elders.  If we had known of using the half cut plastic bottle during our time, surely we should had it filled faster.

When all the holes were filled up, again we were asked to help covered the holes with the ashes of the grass that was dried, burn and mixed with the soil. It serve as a fertilizer for the paddy seeds as well as to hide it from the Sparrow bird which comes in hundreds. 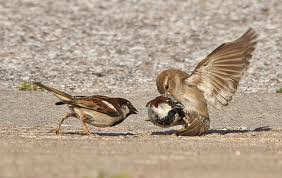 Sometimes we would be on the nursery for look out of the sparrow and brought with us a bag full of 'clay bullet' which we made our self to hit the sparrow with catapult. We made our 'clay bullet' a day earlier by using clay which was available at the bank of a stream and made a ball out of it by rolling it on our palm.

There was a two ways to dry the balls either by drying it the whole day if we have time or by using instant method by baking it. To bake it we made a fire and put all the 'clay bullets' on a metal sheet and put it on the fire. In less than fifteen minutes the bullets is ready for action.

If there was a competition for between my friends and me for the number of sparrows get hit it would be in favor of my friends as a bagful of bullet I have, not even one got hit. They were a very smart sparrow  as they smartly avoided that bullet as we hit them while flying and made a very good escape. Sometimes I made a fluke hit and it was really nice to hit one and we barbecued it. It was a very enjoyable and hard work when I was growing up but it does prepared me to face the reality of life and compare it of what the children of the present times misses.