DEAD PERSON INVOLVED IN AN ACCIDENT

It was reported that a hearse had its journey to a burial site disrupted after it was involved in an accident with a minibus. Since the hearse could not move after the accident, the dead body had to be carried by several people to the burial ground nearby. Minor injuries only occurred to one of the dead man's relative. Others escaped unscathed, including the dead man body. It was reported in today’s newspaper. 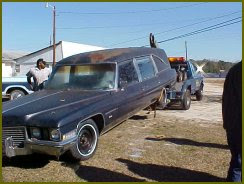