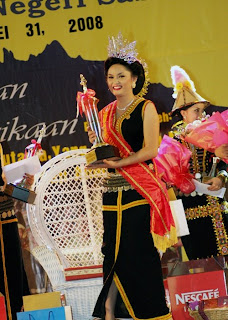 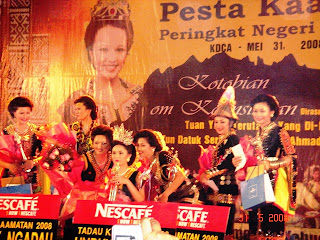 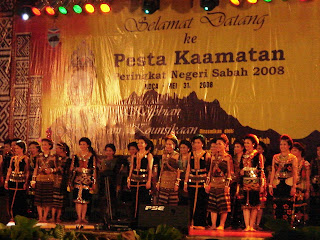 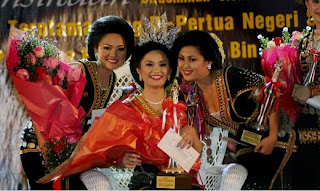 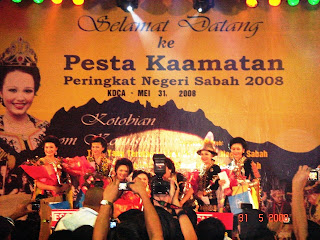 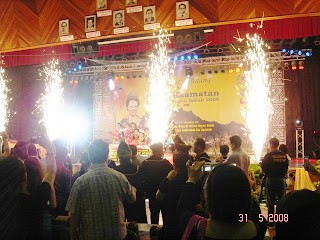 A
Aburst of firework display just after the announcement of the winner. First time in Tadau kaamatan. Is it relevant to the celebration? You to decide! Apa pun terlompat bah Unduk Ngadau bila api muncil didepan mereka.
UNDUK NGADAU 2008
The legend , it was said that ‘Kinoingan’ sacrificed his beautiful and obedient daughter called HUMINODUN so that all his people would have seed to grow the food they needed. It is therefore a must to hold a Unduk Ngadau contest as a deep sense of respect and admiration that the KadazanDusun have for the legendary “Huminodun”. It is a sacred title ascribed to Huminodun for her absolute to Kinoingan so much so as to be willing sacrifice for the sake of her father’s creation. Unduk Ngadau is also coined as a commemorative term in praise of Huminodun’s external youth and the total beauty of her heart, mind and body.

In essence therefore , the ‘Unduk Ngadau’ of selecting from the KadazanDusun beauties, one of who would best resemble the ascribed personality of Huminodun.
Selecting of Huminodun
I was at the Hongkod Koisaan (KDCA) from 12.00 pm onwards until the crowning of the Unduk Ngadau 2008. I was able to get some pictures but since i was far from the main stage, i just shot whatever i could get with poor quality of the pictures.
Merry is the word that describes the event, as laughter and gaiety was apparent in the faces of the celebrants. They came with friends, family, groups and i guess many tourist from different countries. What suprised me was the participation of the younger sets of youths whether participating in dances, assisting their elders welcoming guests in their traditional attires and manning their traditional houses. Apart from that they were seen mingling with the crowds both inside the building or under the hot sun. It is a good sign that the younger generation are interested in the traditional custom.

There were 36 contestants for the Unduk Ngadau, 15 manage to get to the final round where they were jugde on Q & A (IQ test). More than half of the 15 finalist failed to give good answer, maybe due to their nervousness including few favourites contestant of which they failed to get good position due to the answers given. My favourite for the title also failed in the Q & A but still managed to get in the top 3. The top 7 are as follows :
1. Leonie Lawrence Gontuni - Penampang
2. Florence Masimbin - Kinabatangan
3. Emily Majil - Tambunan
4. Petronella Cherry Bernard - papar
5. Verone Lansu - Keningau
6. Aloysia Thecla Phillip - Kota Belud
7. Anne Mary T. Khan - Kuala Lumpur