When I came home from work today, I enter from the kitchen door as it was not locked and my mother was at the kitchen. I was met with a very strong Bambangan aroma which was so aromatic. I asked my mother who gave her the Bambangan which was inside a plastic. She answered me that there was no Bambangan without telling me what was inside the plastic. I opened the plastic bag and there was this big Cempadak (Jumpulut in Chinese). How wrong was I thinking that it was a Bambangan aroma? Mother told me that my brother gave us the Cempadak. 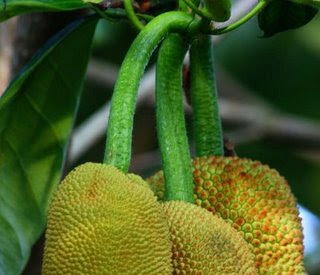 As I said at my last posting, the seasonal tropical local fruits are now at its season and this posting will not be the last on the tropical fruits. The Cempadak have a pulpy, thick pulp which sorround its seed and really sweet taste. The pulpy seeds were as big as buah Salak and not really packed. That was why the pulpy seed were bigger. 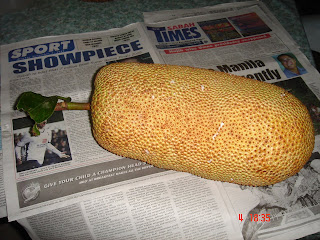 My mother told me that she just want to taste one pulpy seed only. My mother is not the type that really likes to eat fruits. I wonder where I get the genes as I am fond of fruits. 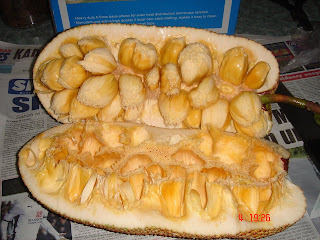 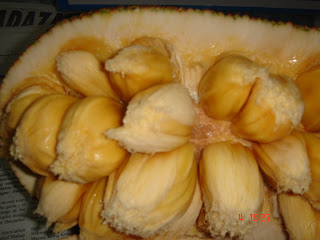 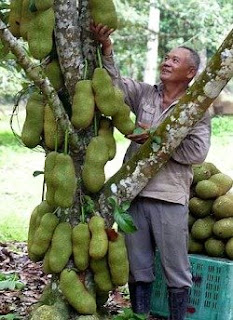 Apart from making Cempadak fritters, the Cempadak just like the Tarap when young is good for making simple Cempadak soup. The preparation is the same as making young Tarap kampung style soup. 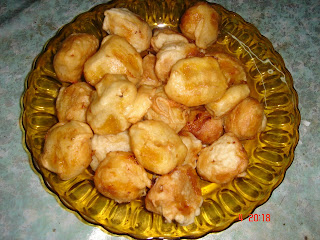 As I was typing this post, I ate few pieces already as it’s so yummy and not to worry as I use cooking oil with Omega 3. Healthy ….. what!!
Posted by BUTIZA'ON at 9:46 PM
Labels: CEMPADAK