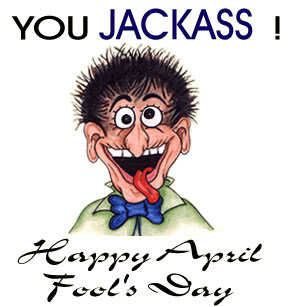 April Fools' Day is observed throughout the Western world. Practices include sending someone on a "fool's errand," looking for things that don't exist; playing pranks; and trying to get people to believe ridiculous things.

It was observed before but gradually as years passed by it was no longer practiced as before where people were trying very hard to get somebody fooled. Here in particularly my place also observed April fool in our own way.

There was one time few years ago that I finally get a friend fooled. During that time I was working and just remembered that it was April day. There was this friend who returned from KL after studying there for couple of years. During that time it was like some sort of celebrity if you happened to study there and when you went back to the hometown you tend to show off.

I called him for breakfast in town and informed him to fetch me at home. He was excited and for sure will wear his celebrity like outfit to show off. I was in the office doing my routine work as office staff as usual after the call I made.

He did come to my house and according to my mum; he was wearing his best up-to-date outfit and did not believed my mum telling him I was working. He didn’t realize that he was on a fool’s errand. Still not believing my mother that I was working and thought I was sleeping, he tried to look at my bedroom.

He was not happy and called few of his friends of what happened to him but was reminded that it was April fool prank from me. He tried to get even with me by trying to make use of his friends to fool me but I was prepared then of any prank by them. It was indeed very funny but at the same time felt sorry for my friend.