I was fascinated after reading an article regarding centuries of unbroken tradition of rotting the dead by the people of an isolated village called Truyan in the island of Bali, Indonesia. They do not bury or cremate their dead but instead let it rot under a sacred tree called a Banyan tree believed to be the earthly form of a sky goddess. Bodies are placed on the ground under the tree, protected from dogs and wild animals by bamboo enclosures. 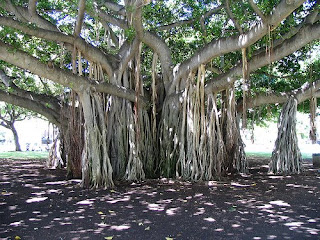 I still remembered when I was a little boy and told that the Banyan Tree is the place of the devil and I was told to avoid playing near it. Now when I come near to the tree I felt an eerie and uncomforting feeling. There were also the bravest kids who cut the root of the Banyan tree and swing themselves and howl like Tarzan. If the parents knew that their kids were playing with the roots of the Banyan tree and their kids had a bad dream, they will sought the help of the local priestess (Bomoh) to chase away the devil from their kids.
The Trunyan traditions and ritual practices are inherited from their ancestors dated back at least 800 years ago. If the Trunyan people violate the practices it will cause mishaps like sickness or even death. That is why dares not to change or disobey the practices and rituals.
In Kota Kinabatangan, Sabah, there was also this place called Bukit Batu Putih where dead was carried to the mountain a placed in an opening of the rock hill. The dead were put in a coffin and let it rot. The question is how they manage to carry the coffin top the hill, as the hill was steep to climb. They must have a way to carry those coffins.
Posted by BUTIZA'ON at 11:49 AM
Labels: STRANGE