When the Chief Minister of Sabah strike the gong to launch the Papar Harvest festival tomorrow, the celebration all over the state will begin. District level Kaamatan will start and so will villages all over the state. Merry making and the sound of various traditional instruments will fill up the air in its grandeur.

For the first timers, they will be able to view the various ethnic in their traditional finery, their traditional dance and if they are the adventurous one will accepts the invitation to dance or drink the traditional alcoholics drink, which they offered. Once you are offered the drink you must accept it as a token of friendship and respect.

The culmination of the Harvest festival is the state level, which is held for 2 days that is on the 30th May and 31st May. Here, a selection of the prettiest lady or Nguduk Ngadau will be held where all pretty girls representing each district will vie for the title of Nguduk Ngadau whereby the winner will represent Huminodun. 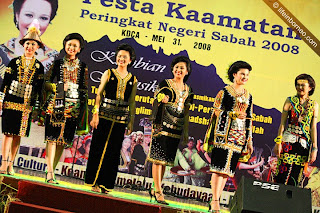 The Legend;
“Unduk Ngadau” owes its origin from that part of Kadazandusun genesis story, which pertains to sacrifice of “Huminodun” - Kinoingan’s only begotten daughter.
Kinoingan (God) and his wife Suminundu had a beautiful daughter Huminodun. The people of Sabah were starving, so Kinoingan sacrificed Huminodun. Out of her body came rice seeds, which grew bountifully. That's why Kadazans have beauty contests during these celebrations: an utterly unique attribute. The Unduk Ngadau (beauty queen, literally means "heart of the sun") is supposed to embody all the qualities Huminodun had: beauty, grace, strength and bravery.

Harvest Festival is not only the main celebration during the month of May but also various and interesting events that being organized by the tourism Industry. More information about the festival for the month of May can be obtained by acquiring from the Sabah Tourism Board.
Posted by BUTIZA'ON at 9:15 AM
Labels: Kaamatan