Ever thought of doing traditional rituals that can bring rainfall to cool off the temperature in Kota Kinabalu? I can’t remember if there was a rituals performed by the Bobohizan priestess to please the rain God for the arrival of early monsoon. There was the the high technology performed by the government to spray the salt solution to the clouds by using helicopters but do not know of its effectiveness. 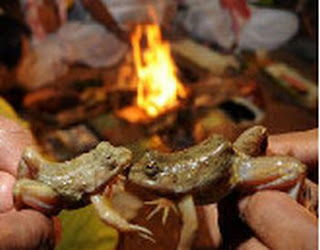 A very strange rituals to bring rainfall was performed in India where a Frog marriage was solemnised to please the rain God and hope of an early arrival of rain. There is a mythological believe among Hindus that if the wild frogs caught by the people were got married with Vedic rites and traditional marriage rituals like human beings, that can bring rainfall in coming days. 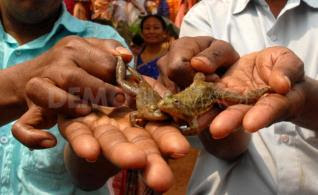 The amphibians were then fed a special celebratory lunch of flies and mosquitoes. After the ceremony, the happy couple was sent on their honeymoon - by being released into a local stream. The marriage went off very well but there was no report whether there was rainfall after the marriage ceremony.
The news was not so good, however, for a male toad that attended the ceremony, which died during the proceedings.

Posted by BUTIZA'ON at 9:00 AM
Labels: STRANGE