Anyone of you heard about an incestuous couple or relatives falling in love but was punished for their love affair? It happens and practiced before in every longhouse found in Sabah especially in the district of Kudat before Sabah gained independence.

I have been visiting the long house at KDCA for many times but in no time seen any big ‘Bubu’ at its building. In the olden days apart from catching fish, another usefulness of it was punishing incestuous couples. Anyone found guilty of the crime would be placed inside the ‘Bubu adat’ and thrown to the river or sea and eventually would be drowned. Any child born out of the relationship will also be placed inside the ‘Bubu Adat’ along with the parents. 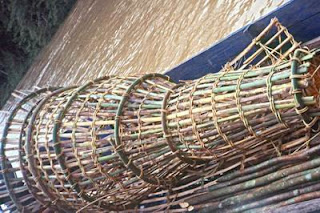 It was a common practice before and every longhouse at that time had its own ‘Bubu Adat’. The practice stopped after Sabah gained independence.

What would it like be if the ‘Bubu Adat’ still being practiced now in this time of modernization? It would be a lot of debates amongst the people, non- government organization etc voicing their utmost disbelief of this kind of barbaric punishment. It would be kind of cool if this practice reintroduces again to scare potential couple of incestuous crime.
Next time you visited any longhouse, look for the big 'Bubu Adat' and ask the headman of the longhouse about their practice before independence.
Posted by BUTIZA'ON at 8:44 AM
Labels: ALAT TRADITIONAL