Leeches are commonly known as a kind of animals that suck blood, and there is fresh water, terrestrial and marine leeches. Scientifically it is categorized as annelids, which is segmented worm comprising the subclass Hirudinea. It is closely related to earthworms, and it is hermaphrodites that have both male and female reproductive organs.
The leech’s saliva anaesthetizes the wound area, dilates the blood vessels to increase blood flow and prevents the blood from clotting. 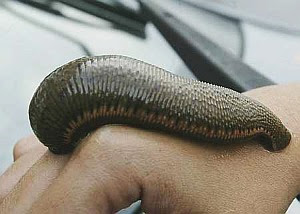 I am not writing about leeches with its medicinal value but just highlighting some funny experience with women who would jump by the mention of Leeches.

Long time ago when planting of paddy was still done manually, women usually does the planting after the men prepared the paddy field. The planting was done usually on ‘Gotong Royong’ (group of people) where planting takes turn whoever prepares their paddy field first.

There were ladies who will jump by the mention of that slimy sucking blood creatures and one of them is my sister. It was really awkward and funny to see my sister preparing herself before going to the paddy field. She will cover herself from toes to her midsection with stocking and applying detergent or soap to her leg and hands.

In those days, paddy field with a bit swampy seems the favourite of the leeches. People who is phobia with Leeches will know which paddy fields was safe for them to help out with the planting of the young paddy.

When you hear the shrieking, shouting and running as if somebody just died, the show has just began where one of the ladies found out that a leech was sticking at her leg. She will run hay way needing help to remove the leech from here leg. Usually the ladies will run for help to the person nearest to her and what happen when the other person also having problem with leeches. You will be laughing your gut out watching them running together. One was running to get away from the other until the leech fall by itself by the hard running and thumping of legs to get rid of the creatures.

I noticed also that people who is phobia with Leech tend to hit you with something during her ordeal if you are not fast enough to removed the leech from her body. Usually when the leech sucked the ladies, there was no point to ask her to continue planting paddy. That was her off day.

Posted by BUTIZA'ON at 9:17 AM
Labels: LEECHES