My favourite Anoop Desai was not the automatic choice by the audience to move up to the 12 finalist of the American idol. When he performed, I know he was in deep trouble as his performance was not great as compared to his audition. Hopefully he will get one of the wildcard spot to move to the nest round. We will missed Tatiana Nicole as she didn’t make it also. 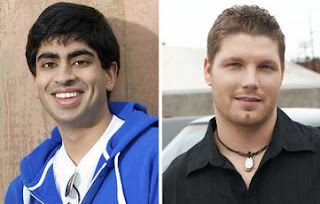 Danny Gokey as expected move up and judge’s favourite, Alexis Grace. This petite lady did well on her first performance. The surprise was rigger Michael Sarva who joins Danny and Alexius to the top 12 of the American Idol. Are there any surprises for the coming performance of the other group? Let’s wait and see.
RATE THE CONTESTANTS
The viewers’ rankings were similar to the actual results that were revealed Wednesday evening. However, viewers predicted that Anoop Desai should move on rather than Michael Sarver, with 35% of viewers voting for Desai and 24% voting for Sarver.Among the findings:
Respondents were asked to pick their top three favorite contestants from Tuesday night’s show that they thought should advance to the next round.
Danny Gokey - 50%Alexis Grace - 40%Anoop Desai – 35%Ricky Braddy – 25%Tatiana Nicole Del Toro – 25%Michael Sarver – 24%Jackie Tohn – 21%Casey Carlson – 20%Ann Marie Boskovich 19%Brent Keith – 17%Stephen Fowler – 15%Stevie Wright – 8%
Posted by BUTIZA'ON at 1:31 PM
Labels: AMERICAN IDOL

Danny Gokey seems like a solid guy, aside from the fact that he's a great singer