Once again our attention will be focus on the Perak parliamentary by-election where another two state seat simultaneously being held at the same time. What makes the Bukit Gantang parliamentary by election more interesting compared to the two state by-elections is the candidancy of the previous Pakatan Chief Minister, whether he commands the majority when pakatan rule the state will be known after the voting process. The election would be very important both to the present and former government of Perak.

Former Perak Menteri Besar Datuk Seri Mohammad Nizar Jamaluddin will be PAS' candidate for the Bukit Gantang parliamentary by-election, polling of which will be held on April 7. PAS president Datuk Seri Abdul Hadi Awang made the announcement during a PAS rally at Taman Kota Jaya in Simpang here tonight. 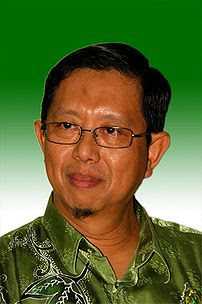 The Barisan Nasional (BN) has named Bukit Gantang Umno information chief Ismail Saffian, 49, as its candidate for the seat. Nomination is on Sunday. The by election is due to the death of its MP from PAS. 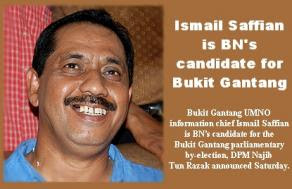 PAS spiritual adviser Datuk Nik Abdul Aziz Nik Mat has given his blessing for former Perak menteri besar Datuk Seri Mohammad Nizar Jamaluddin to contest in the April 7 Bukit Gantang by-election.
Nik Aziz who is Kelantan Menteri Besar said last month that he could not agree to the suggestion that Nizar be fielded in the Bukit Gantang by-election since the Pas and its opposition allies still regarded Nizar as Perak Menteri Besar.