Mentor 3 debut last night saw three popular personalities fight it out with their protégé singing their heart out with a good rendition of popular songs. The stage was set for two rounds of performance by the protégé and later duet with the mentor and protégé. It was indeed different concept of competition as compared to the other reality shows that we have now.

The competition started off with protégé Fira performing with a rendition of a slow song popularize by the late Sudirman and her second song was a duet with her mentor Lah. The performance was given good comments from the judges but received the lowest marks of the three contestants.

Evo duo group the protégé of mentor Jaclyn Victor performed next with their medley song. Although the harmony was good, it was like one tried to overshadow the other vocally louder than the other. The second performance with their mentor was proven that they can harmonize the song perfectly. Good song by the duo, which received encouraging comments from the judges.

Last to perform was Chaq with mentor Ajai, a popular song composer and musician, who sang a very slow number. Chaq was the elder brother of Akademi Fantasia Champion Stacy. They formed the group Evoke to participate in the Gangstars competition but did not make it to the final. After Stacy compete the reality competition, Chaq joined another group B.A.D, which was, manage by another reality show artiste Adam. 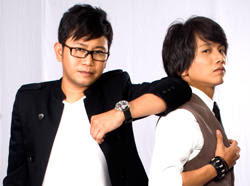 Chaq and Mentor Ajai sang the song Gagap that was a fast number and surprisingly Ajai did a great job by singing and doing the dance. It was protégé mentoring the mentor this time, as Chaq is a good dancer. They received the highest marks from the judges and if the performance is consistent then they will top their group to the next semi-final after performing three times. Will Chaq follow the footstep of his younger sister and win the RM100, 000.00 and proves that they are a family of talented entertainers?

They topped the group A with high marks from two judges, judges selected from the school of music which was amongst the audience that night and also SMS votes.
Posted by BUTIZA'ON at 7:55 PM
Labels: ENTERTAINMENT

After OIAM3, I have to resort to watching Mentor3. But I'm only watching it cos of Stacy's bro Chaq and the other Sabahan guy... yang mentor dia si Adibah Noor tu.